In 2005, Marie-Anne Thieffry came across the cardboard furniture designs of architect Frank Gehry. She was inspired to begin working with what might be considered an unusual artistic medium. “I hadn’t considered cardboard a material that could be shaped,” she says. She has a background in art and design, although she essentially trained herself to work with cardboard. Once she got going, she never looked back. Her lamps and furniture designs, and especially her sculptures, emphasise the softer side of cardboard. “Working with this material involves a few paradoxes: the startling interplay of light and shadow, the fragility of a material that is often used as protection.”

Autodidact Marie-Anne Thieffry made and remade objects in order to teach herself and perfect her method. She first started by making traditional cardboard furniture, but quickly realised that she was not so much interested in using cardboard to make forms, but rather to use forms to accentuate the actual structure of cardboard, leaving its traits and surface structure apparent. To Marie-Anne, the wave like structure of the cardboard’s border is the essence of this material and is what her works accentuate. She does not use many tools, usually a cutter knife, her hands and glue. Marie-Anne does not like to work cardboard in flat forms, but rather aims to give it volume. She shapes her cardboard figures in plaster moulds, placing the cardboard within them and then securing them with straps.

Marie-Anne Thieffry first came across cardboard work around 2005 when she first discovered Frank Gehry’s cardboard creations, feeling an immediate affinity with this sculptural technique that she found extraordinary. Until then, she had only understood or seen cardboard as a material that one uses to box items up in or perhaps use when moving, but never had imagined its creative aspects. It is a quasi-invisible material, all around us, that we might look at but not see. It is not a noble material but offers a rich array of possibilities when working with it. She now works on three principal types of forms: feminine sculptures that are a sensual and respectful homage to femininity, light sculptures that distort light and shadows playfully, and sculptural vessels such as jars and vases for practical use or decoration. 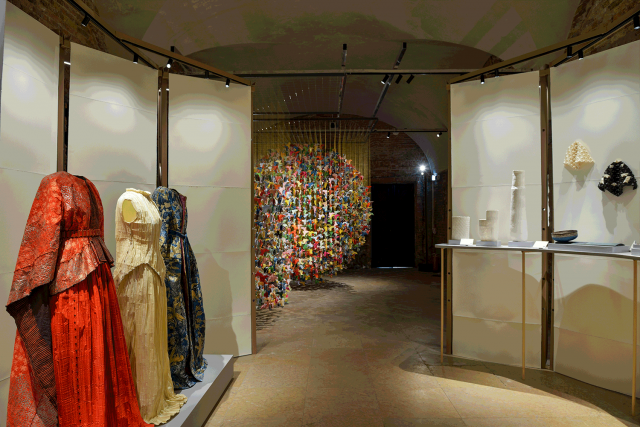